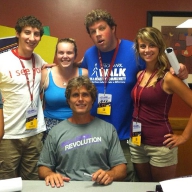 This summer, I had the privilege of going to Indiana University for the second year in a row to attend a leadership conference with leaders from the Best Buddies Program.  There were approximately 1500 people there, from all over the world.  There were staff members, student leaders, buddy ambassadors, parents, and active volunteers.  I was not there alone, however, because I traveled with Lafayette’s Buddy Director, Ryan Beahn.  The Buddy Director is a buddy ambassador who has a leadership role in his chapter.  So, Ryan meets with the officers at our chapter to plan meetings and complete other important tasks.  Ryan is a wonderful person and friend.  We had a great time together, and we made a lot of new friends.  Ryan likes to brag that he got more numbers than I did, making him more popular me, which he definitely is.

The overall experience was fantastic.  My favorite part of the conference was the sheer excitement, enthusiasm, and support that everyone had for equal rights for people with and without intellectual disabilities.  We attended speeches and performances with everyone at the conference, and then we would split up to primarily work with other members of the state of Pennsylvania.  We also attended some interesting workshops that helped build our leadership skills.  In the end, Ryan and I didn’t want to leave, but we knew we had to so that we could bring all of our new knowledge and ideas back to Lafayette to make Best Buddies here even stronger!